A new report says that more people have been visiting food banks across the province more frequently, including a "concerning" number of people with full or part-time employment.

Feed Ontario's annual hunger report — which captures food bank usage in the province, analyzes trends and provides recommendations — revealed that 510,438 individuals visited food banks across the province, more than 3,059,000 times over the past year — an increase of 8,848 more people.

And over the past three years, those with employment income who access food banks have increased by 27 per cent.

The organization says it may seem "counterintuitive" given that unemployment rates in Ontario are at their lowest point in the past 10 years, but precarious and temporary jobs and low wages are resulting in struggling families.

"It should be a concerning to everyone that we are seeing an increase in the number of employed individuals accessing our services," she said.

"Sometimes people have a very false impression or understanding of who it is that's accessing our services...people come from all walks of life when it comes to accessing a food bank."

'It's been down a bit': Thanksgiving food drive off to slow start

These numbers, the organization says, show that while people are working, they can't afford all of their expenses, including food.

In its report, Feed Ontario says that almost half of all minimum wage workers — who account for 15 per cent of Ontario's work force — are above the age of 25, with one third of them holding a post-secondary degree and a half working full time. Part-time work has also increased.

Meanwhile, the number of temporary positions — such as "casual, seasonal, and contract roles" — has increased by 31 per cent since 1998.

These positions, Feed Ontario said, have lower compensation and make it difficult for individuals to build savings for a home or support a family.

"All of these things really start to impact workers and their ability to make ends meet," said Stewart.

Feed Ontario also noted that since people are using more of their income on pricey housing, little is left for all other necessities, like food and clothing.

More than 87 per cent of those accessing hunger-relief programs are living in rentals or social housing, which takes up 70 per cent of their income.

The two biggest groups of those using the food banks are single-person households and children, who comprise around 33 per cent of those using programs.

Stewart said that the number of children points to families on limited income who are unable to make ends meet.

Over 70 per cent of those accessing food banks say that social assistance or government benefits like employment insurance is their primary source of income.

But the income received from various programs isn't matching up to what's needed for basic necessities.

The market basket measure, which reflects the number of people whose income can't afford the cost of necessities like housing and food, shows that 1,435,140 people in Ontario are living below the poverty line, including 213,624 children.

Feed Ontario says that this means one in every 10 Ontarians has insufficient income to afford a basic standard of living.

Stewart noted that social assistance programs in Ontario are not supporting individuals enough to help them move out of poverty. Ontario Works provides recipients with $733 a month, while the average single-person household would need $1,641 per month for basic necessities.

"While food banks across the province do incredible work and we are so proud of our network, you would not get anyone within our network that says that it's replacement for good public policy," she said.

"Food banks see the symptoms of poverty... we're not a solution to this issue. Good public policy is."

In its report, Feed Ontario said that income provided by Ontario Works (OW) and Ontario Disability Support Program is also not keeping up with inflation, which means the gap between social assistance and what people need for a basic standard of living is growing.

The report calls on the government to close this gap, which can range between 23 to 60 per cent below the income that is needed.

The greatest difference noted by Feed Ontario is in Ottawa-Gatineau, where the shortfall between Ontario Works and money needed to afford a basic standard of living is $1,057 a month. 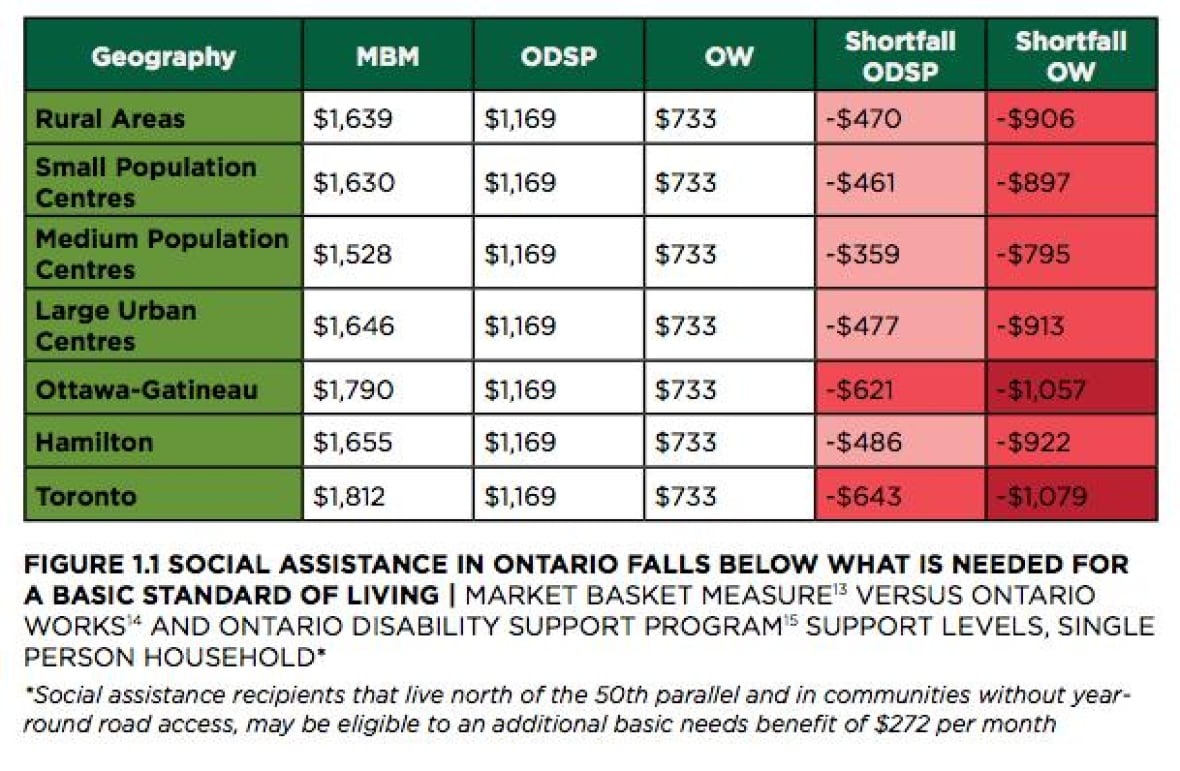 Feed Ontario wants to close the gap between income provided by social assistance programs and the amount of money needed to afford a basic standard of living. (Feed Ontario)

Feed Ontario is also asking the government to retain the current definition of disability under the Ontario Disability Support Program. A potential change noted by the provincial government in November 2018 would exclude episodic illnesses — such as depression, Parkinson's disease, and diabetes — which would mean people would no longer qualify for these benefits.

A decision has not yet been made.

It also recommends the development and introduction of a portable housing benefits to assist low-income families with high housing costs.

The number of people accessing services, the organization says, show that "there has never been a greater need for collective action than there is today."

Stewart noted that in the coming months, food banks could use help with the winter weather and during the holiday season.

"The reality can flip so quickly for many individuals," she said.

"Today is always the day for collective action and there's never a better day for us to work collectively both with our communities alongside both our provincial and federal government because there definitely is a solution to the problems that are facing our province," she said.